What is the Unibond Aero 360 and how do you use it?

In this blog post we will discuss the key features and benefits of the Unibond Aero 360 and how it could benefit your home.

What exactly is it?

The Unibond Aero 360 is a small plastic container with air vents that allows air to pass through.

Inside the unit is a unique tablet that absorbs excess moisture from the air and deposits it as water in the tank below. 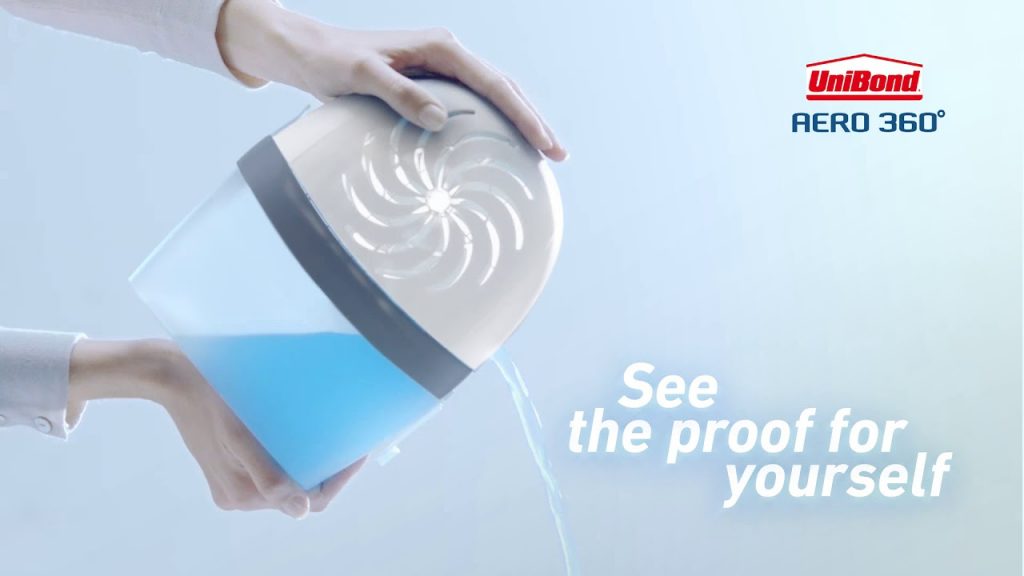 Where to use the Unibond Aero 360?

Use the Aero 360 in bedrooms, dining rooms, in hallways, in fact anywhere in the home.

It is small and silent and won’t leave any marks on the shelf or window ledge where it is placed.

(The Aero 360 is not really suitable for use in very damp rooms such as cellars or garages as the moisture levels could be far higher than normal rooms of the house.)

How long does it last?

You might think the Unibond Aero 360 will be used up in a few days however, it actually lasts quite a long time.

You will see the first drop of water within the first 12 hours and water will continue to collect over the next months.

If the tank becomes full or is nearing full capacity, you can simply open the plug and empty the contents of the water tank.

Do you be careful with the contents of the tank as the water will have chemicals in it from the tablet and this mixture could mark or damage furniture.

Why would you use Unibond Aero 360? 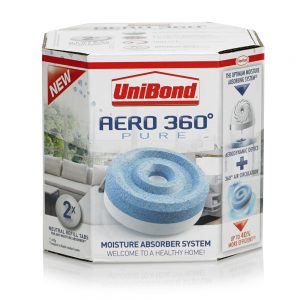 The Unibond Aero 360 is small and compact

It continues to work day and night and also does not need any power or batteries to be used.

This makes it preferable to a dehumidifier for some people as once you have bought the unit and refills that is everything you need.

You don’t need to spend any money on running it.

Each tab will last for around three months and depending on the moisture level in your home could last longer.

Once the Aero tab has completely dissolved you can empty the water safely and clean the plastic unit of any residual tablet debris ready to use again.

You can purchase refills for the unit which are relatively inexpensive.

They usually work out at around three for £10.

(This means that to buy the starter pack unit which contains one tab and a pack of refills, you would be spending less than £20 to use it for one whole year.)

By purchasing the standard starter pack which includes one tub plus one pack of refills you will have everything you need to see the Aero Bond 360 running throughout the whole year.

You can leave the unit in one room, or you can of course move the unit to a different room on for a few days at a time.

Most people leave it in one room, perhaps behind the curtain and forget about it until they noticed the tablet has run out.

Yes, it is extremely easy to use and set up.

The plastic casing is usually ready assembled, so all you need to do is click it open and place in one of the tablets inside. (The tablets come in a sealed foil packet to keep them fresh.)

It is important not to touch the tablet too much with your hands when putting it in as this could impact the effectiveness of the tablet drawing moisture out of the air. 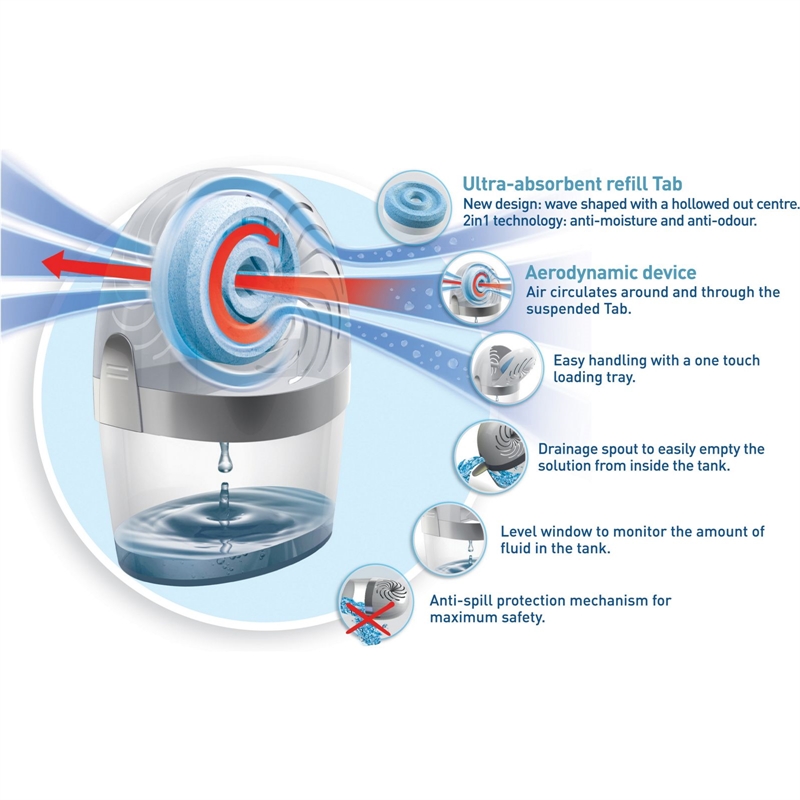 The Unibond Aero 360 is actually extremely successful at extracting moisture from the air.

We have previously used one and moved it around throughout the house over the months. We actually used three units that we rotated around the house and used them all year round.

We found that they filled up very quickly as we had a very damp house at the time.

After buying refills and assessing the price of refills we decided to invest in a dehumidifier which we could run all year round without having to ever replace parts.

All we would need to do is to pay for the small amount of electric that the dehumidifier uses.

For us, the Unibond Aero 360 needed emptying quite frequently and was quick to fill up. If you are like us and have an extremely damp house then the tablet will dissolve more quickly.

If you have a normal house that gets condensation on the windows in the morning, then the Uni Bond Aero 360 will be better suited to you.

Pros of the Unibond Aero 360

Cons of the Unibond Aero 360

Who is the Unibond Aero 360 suitable for?

Unibond Aero 360 is perfect for a small flat or apartment owner. (Someone who will not have a lot of space to store or use a standard dehumidifier.)

The Aero 360 is also perfect for elderly people or perhaps disabled people who may struggle to lift, set up and empty an electric dehumidifier. (They can be quite heavy and cumbersome.) The  Unibond Aero 360 is very light and easy to move around.

If you are a student or the parent of a child who is going to university and staying in student accommodation. One or more Unibond Aero 360’s may be a useful gift as it will help to purify the air in their room and reduce moisture levels helping them to stay healthy.

The maximum sized room that is recommended for the Unibond Aero 360 is a room of 20 m². Anything larger than this and the Aero 360 might not be big enough. Anything smaller than 20 m² will be ideal for using this size of Unibond Aero 360.

Dehumidifierhub.com is a participant in the Amazon EU Associates Programme, an affiliate advertising programme designed to provide a means for sites to earn advertising fees by advertising and linking to Amazon.co.uk